In this article, we’ll detail NFT’s place in the crypto world, legal aspects of owning an NFT, regulations, and its growing market.

Defining NFTS: Where do they belong in the crypto world?

NFT stands for Non-Fungible Tokens, a novel concept that is premised on the blockchain ecosystem. These “tokens” are digitalised creations that cannot be, as the name suggests, interchangeably used in the same way as other cryptocurrencies like Bitcoin, Cardano, etc. They might represent a work of art, music, images, even internet memes or sports highlights which is why each NFT is unique and separate from one another.

In order to establish a firm grasp, it is crucial to understand certain terms and concepts. First is blockchain and how NFTs operate on this system. Blockchain is a distributed digital ledger that is shared consensually with and synchronised across different participants of the database. It is equally accessible by all the members of the system so each gets a copy of all the transactions that occurred on the blockchain. This forms an immutable digital documentation that is not only practically impossible to modify, but also is the most transparent virtual method of recording transactions.

Next on the list are cryptography and encryption. The former refers to the science of hiding information using mathematical theories and computation. Encryption derives from this concept as the process of converting clear information into code. Individuals, companies, governments, basically any party that values and looks to protect private data, use encryption techniques to safeguard their information against outside interference and fraudulent acts. Furthermore, encrypting a text also includes forming digital signatures for the data in question. These signatures make sure that users are only able to spend their own funds and secure the validity of each transaction.

So, NFTs are cryptographic tokens that are most commonly used for their unique and not duplicable nature. Differently from cryptocurrencies, they are created or “minted” using software that embeds distinctive information in them. This information usually contains references to the location (e.g. a URL) of the files that stores the content they purchased as an NFT. As mentioned above, anything within the realm of digital existence, from art to actual sports footage, can undergo the necessary encryption and coding processes to be tokenised. Upon the sale of these tokens, the creator will receive payment in the currency of the relevant blockchain (most likely Ethereum) and the buyer will acquire the NFT to an address of his control via smart contracts. In this aspect, this technology revolutionised the art world, making peer-to-peer trades faster and providing a global platform to countless aspiring artists.

Due to its promising features NFTs have become increasingly more popular and their relevance peaked in the first quarter of 2021. In fact, the drastic jump in the volume of trading of the NFT market has been compared to those of Tulip Mania (the Dutch Tulip Bubble) and the Dot.com bubble. 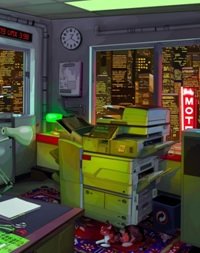 “Replicator,” by the digital artist Mad Dog Jones for $4.1 million to a buyer new to the auction house.

In April alone, there were north of $208 million worth of NFT sales whereas the whole volume of 2020 was around $250 million. However as the saying goes, with great power comes great responsibility and there is a concerning amount of legal ambiguity surrounding the NFT world.

As established, NFTs cannot be divided like other cryptocurrencies and are utilised to represent objects in the actual (or virtual) world along with their characteristics, as well as the ownership of it. In a sense, this is the main factor that contributes to the value of an NFT because much like it is possible to find (or even take) a picture of the famous painting Mona Lisa, it is possible to find an online copy of an NFT. Therefore they act like certificates of authenticity given to the purchaser of a painting by the art gallery, implying that the work is original and digitally signed by the creator.

However, this does not entail the right to copy. Going back to the previous analogy, owning Mona Lisa does not give the owner any copyright over the painting despite having physical possession. Similarly, the buyer of an authentic NFT work cannot make and sell copies of the creation he purchased. This leads to further questions regarding different implementations of the technology where the acquirer might need to obtain all rights to the copyrighted work. To exemplify, if the token is associated with an icon that is to be used as a trademark by the purchaser or if a design agency offers logo designs in the form of a token, they would require the formulation of a comprehensive license.


Gurcan Partners  is a Law and the Consulting firm operates in 9 countries, of which 5 offices are part of the EU. Intellectual Property Law is one of our main practice areas.

A very recent case that happened in the month leading up to the writing of this article is the Museum Francisco Carolinum in Linz. The Austrian museum expanded its exhibition to include NFTs but it was not clear whether they were authorised to make a copy of the token for the presentation monitor, storing the original in the archives. The answer does not become any clearer when the receipt and safekeeping of a classic collection object is not comparable with this process on the point that archiving an NFT takes place completely digitally. A feasible solution is to include a licence from the rights holder while acquiring the NFT, though this does not clarify the legal steps for any future purchases nor does it encompass other jurisdictions.

The lack of case law and the rapidly evolving nature of the technology make it remarkably difficult to apply a consistent classification framework. Actually, the first ever NFT lawsuit, which is set to be a landmark case in this strand of law, was brought before the Supreme Court of the State of New York on May 12. A plaintiff sued Dapper Labs, Inc. and the CEO of Dapper Labs, arguing that their operation violated US securities laws. The main debate revolved around the classification of the NFTs sold by Dapper Labs’ platform, NBA Top Shot, which tokenised and sold moments (mostly highlights) of the NBA games. Friel, the plaintiff, alleged that these tokens were indeed securities on the grounds that they derive their value “from the success or failure of a given project, promoter, or start-up” and investors buy these digital assets with the idea that their price will go up in the future based upon the managerial efforts of the issuer. Therefore they had to be registered in accordance with the relevant US securities laws. The securities experts are doubtful that this case has any merit as a securities lawsuit yet regardless, the ruling of the court will set an important precedent.

Countries may adopt different approaches which further adds to the uncertainty in this area. There is no international consensus about where NFTs should be placed in the legal spectrum, though there are certain countries that have taken more radical steps compared to others. For example, Thailand’s Securities and Exchange Commission (SEC) has officially banned certain kinds of tokens, such as meme tokens, fan tokens, and non-fungible tokens (NFTs). The grounds for the ban is that the SEC is aiming to keep investors from any potential losses due to investments in such tokens which are considered to offer no significant value or have any objective with the prices being largely based on the speculation of market participants. The ban will take effect on 11 June 2021, though it will not have any retroactive effect on existing tokens.

It is evident that technological developments never cease to introduce new challenges as current laws were not formed with the future existence of blockchain and NFTs in mind. Even though general legislative concepts may be employed in some works acquired by NFTs, there are still numerous areas that need to be addressed. In the race of law and technology, technology constantly creates novel conflicts and it is critical to examine whether the current rules are sufficient to cover these issues.


Gurcan Partners  provides legal services in blockchain consultation with its offices in 9 countries and lawyers who are experts in their fields.

Gurcan Partners is a Foreign Economic Relations Board, Hungary Business Council, Association of German Chambers of Industry and Commerce, and International Chamber of Commerce member international law and consultancy firm.

All rights reserved. All rights of Legal Aspects of NFTs article belong to Gurcan Partners. The author has no responsibility for the information in this article. This article is prepared just to inform.

Check out Gurcan Journal for more articles in 13 languages

● Online marketplace for NFTs where the sale of Metarift took place https://makersplace.com/pak/metarift-1-of-1-55174/

● Online marketplace for NFTs where the sale of Replicator took place https://www.phillips.com/mdj

● Dominik Hofmarcher, When a museum buys an NFT: Legal challenges and considerations (2021) <https://www.schoenherr.eu/content/when-a-museum-buys-an-nft-legal-challenges-and-considerations/>